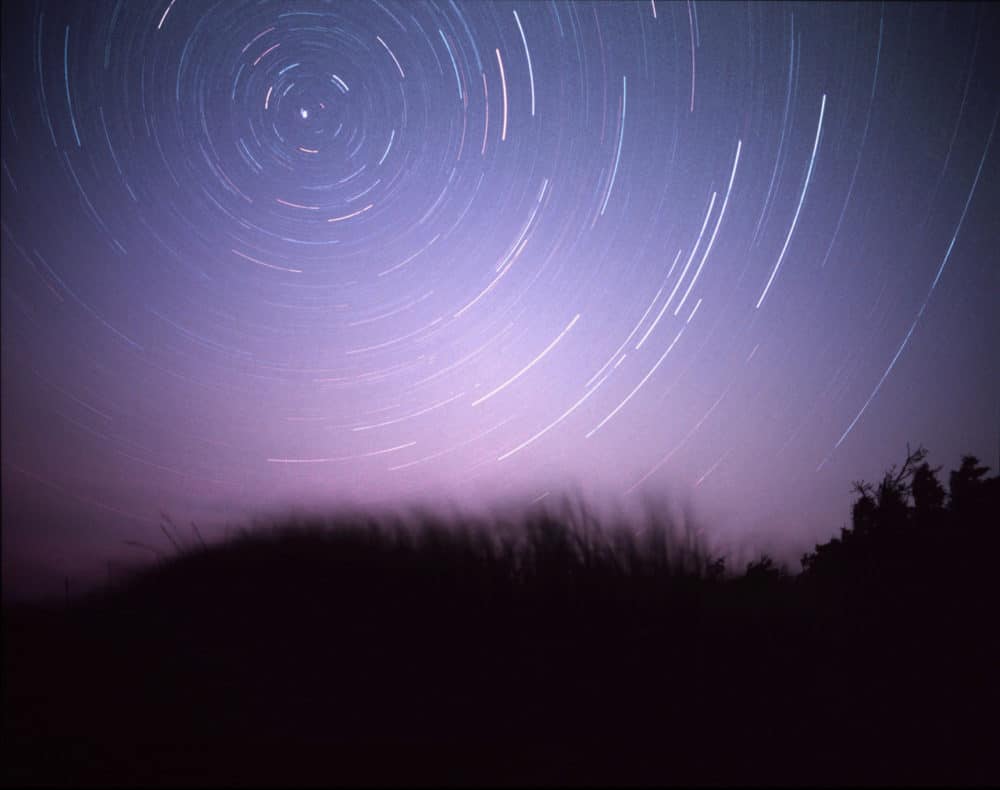 I have been fascinated by the night sky for as long as I can remember.  I wanted to try to photograph it when I was child but had no idea how. People now come to me for guidance on how I do it so let us begin.  You can either capture the sky with static stars or do long exposures which lead to star trails.  In this blog I will describe two techniques I use for capturing star trails.

Dust off the film camera.  Long exposures are the one area in my work where film still has an advantage. Light interacts with film grain over time in a way that is pure magic. The concept is simple, put your camera on a tripod and leave the shutter open for up to several hours. But it is not easy. The challenges are light pollution, space junk, airplanes, passing cars (even at 3 a.m.) and even fireflies.  You have to love being out in the still of night to do these kind of photos because so very few work.  You have to be in part of the world with the darkest skies, far away from any light.  You should be far away from an airport and check the path of the International Space Station.

In the Northern Hemisphere point your camera toward the North Star to get that beautiful circular motion.  Use a compass if you are setting up the shot in the daytime. If at night, bring a powerful flashlight to aid in focusing on the foreground. Your film speed should be at least 400.  Use a wide angle lens and open up to at least 5.6, wider if you can get the depth of field to get the foreground and infinity in focus.  In the following photo I focused on the trees.  I was camping on Price Edward Island and I opened the shutter at 2 a.m. and closed it at around 3:30.  A car passed by at some point and lit up the foreground which I fixed in Photoshop, leaving just a little bit on the right side of the photo to give it texture. 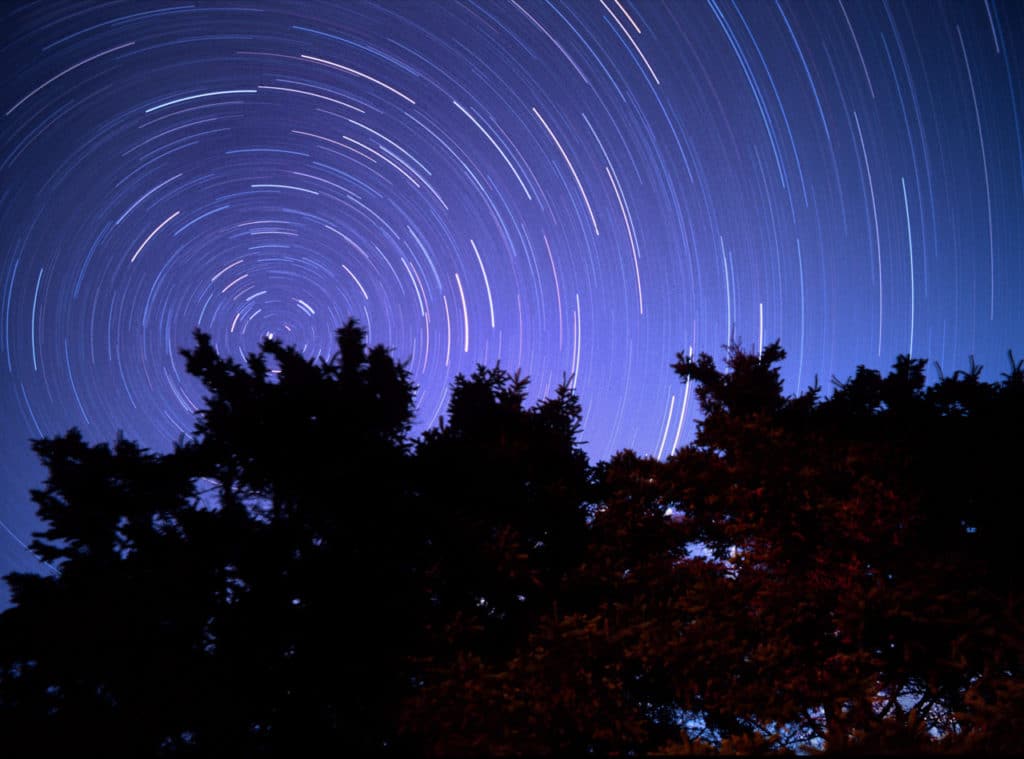 The feature photo in the beginning of this post was also on Prince Edward Island.  It is a double exposure.  The first taken right after sunset to get some light in the sky. The second was a long exposure in the middle of the night.  I used a compass to point my camera north and was lucky that the North star was in that sweet spot.

Digital star trails are a little more forgiving.  You can edit out unwanted elements easily, i.e. light from airplanes, etc and the cumulative effect of light pollution isn’t as much of an issue.

Capture a sequence of 30 second exposures.  Use a shutter release cable to eliminate camera shake.  Take them in quick succession allowing no time in between shots.

Pull each capture into Photoshop as a stack. One layer for each photo.  There is a script to do this. Then in the layers panel set each layer mode to “lighten” and watch your image appear.

The following two stacked images were taken in Sugar Hill, New Hampshire.  Multiple exposures over roughly a half hour. 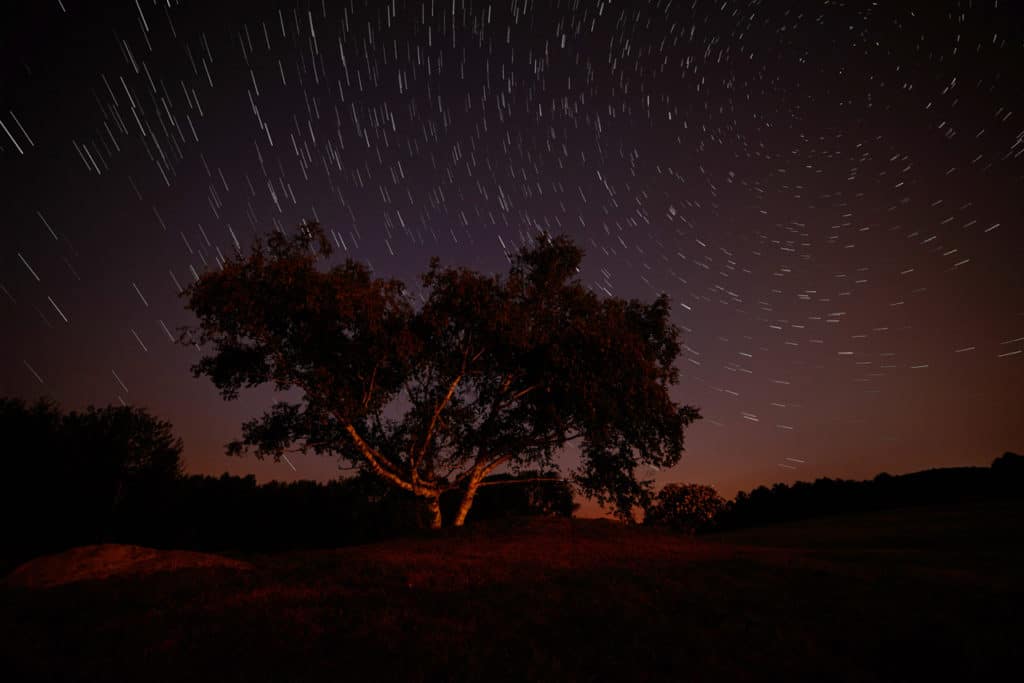 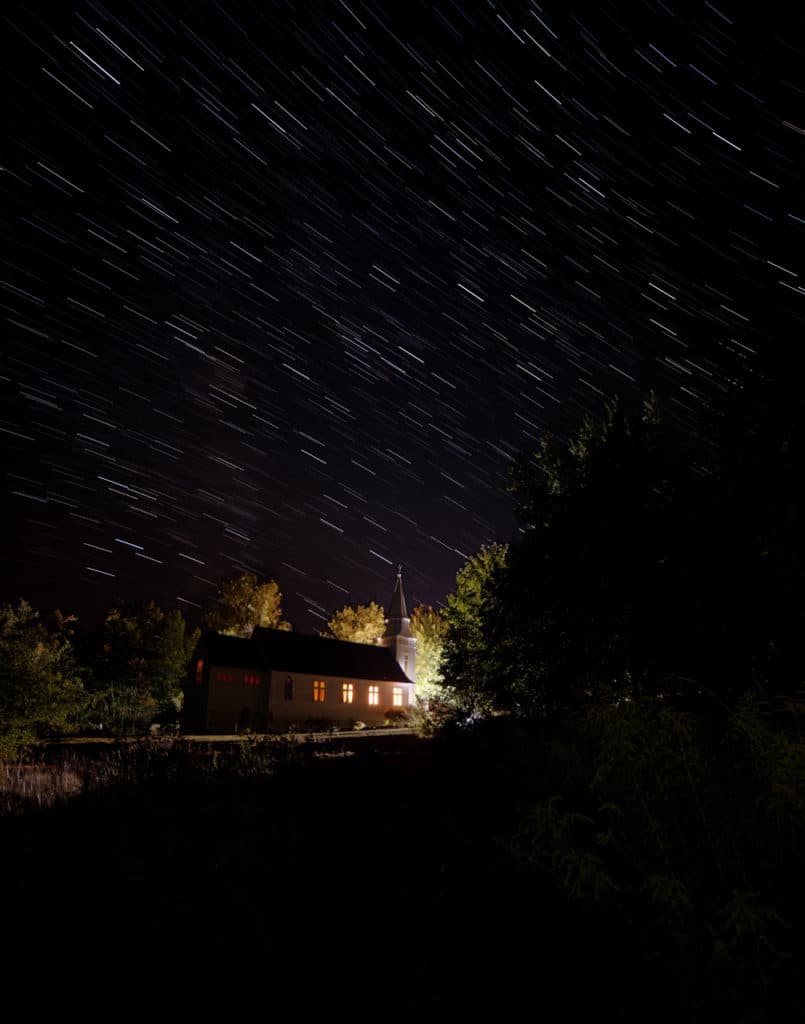 Once you find success in one of these techniques and experience the powerful silence of the night sky you will be hooked. Ask questions here and share your results.