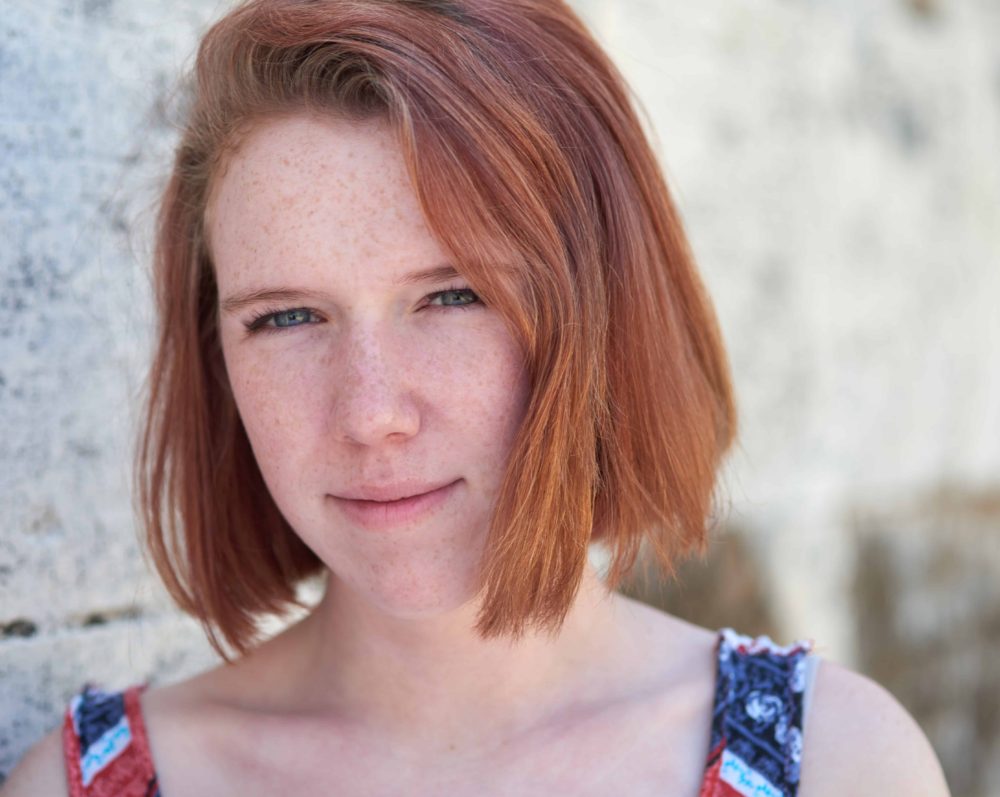 Although I primarily focus on one person at a time, in many cases I could not do what I do alone. I need helpersâ€”stylist and assistants. I love hearing about the experience from their perspective. So I’ll let my daughter Rachel take it from here. She often assists me on photoshoots. This was an essay she wrote for her theater class where she compares a photoshoot to a performance. It ties in very nicely with the magazine-style portraiture I am rolling out now.

(One clarification, I didn’t actually instruct her to throw the powder AT the models… 😉 )

Over break I worked as an assistant to my mother, a photographer, on multiple photoshoots. I helped her photograph an actress/dancer, taking creative shots where flour was thrown at her. I assisted on a photoshoot of the daughter of old friend of hers from high school, who is a dancer, where her headshots were taken as well as creative dance shots with a fog machine, and fabric being thrown into the air. I went into Boston with her to do a corporate shoot, where she took headshots for the company website. I also assisted her in photographing one of my friendâ€™s newborn baby. When we think about the art of photography we often only look at the result, the photograph, if you take a step back to behind the scenes youâ€™ll find a unique performance was put on to obtain that picture. This performance entertains, transforms, and creates a beautiful object, and a beautiful feeling for the lucky audience member who is the subject of the photo.

[ngg_images source=”galleries” container_ids=”20″ exclusions=”914,915,916,917,918,919,922,923″ display_type=”photocrati-nextgen_basic_thumbnails” override_thumbnail_settings=”0″ thumbnail_width=”240″ thumbnail_height=”160″ thumbnail_crop=”1″ images_per_page=”20″ number_of_columns=”0″ ajax_pagination=”0″ show_all_in_lightbox=”0″ use_imagebrowser_effect=”0″ show_slideshow_link=”0″ slideshow_link_text=”[Show slideshow]” order_by=”sortorder” order_direction=”ASC” returns=”included” maximum_entity_count=”500″]Like a typical performance, you might see in a theater, a photoshoot has a set and lighting. Before the subject arrives, the lights must be set up and put in the proper position, sometimes a reflector is necessary to bounce natural light from a window to create a softer look, the backdrop must be set up, as well as any props. Sometimes there will be set changes throughout the photoshoot, so the materials must be available for a quick re set. When everything is set up, and the subject arrives, there is already an atmosphere present that matches the tone of the shoot. For an onsite corporate shoot, itâ€™s a simple white backdrop with lighting set up to create a professional headshot. For the more creative shoots there are more fun props like a fog machine set up ready to use. For the newborn baby shoot, the heat was turned up to keep the baby comfortable when not being held, a large flat beanbag with a blanket over it, where the baby is placed, and the blanket extends onto chairs to create a seamless backdrop. The performance begins when the subject arrives, my mother takes on a persona to make whoever is being photographed, along with anyone accompanying them, feel relaxed and excited about the process.

Not everyone enjoys getting their picture taken, people feel self-conscious, they donâ€™t think that they will look good. As a photographer, it is my motherâ€™s job, through her performance, to put people at ease, and to make them look, as well as feel, beautiful. This begins the moment they arrive, everything else is set up so now itâ€™s time to set up the subject. My mother will do their makeup appropriate for the type of shot, and give them instructions beforehand on what kind of clothes to bring, along with having a few fun outfits of her own to use. Through her performance, she creates an atmosphere where people can relax and let their guard down, and truly be themselves in front of the camera. Her enthusiasm helps people let go of any fears they have of being in front of a camera, lets them enjoy the process and by the end they feel beautiful and confident. This applies to all ranges of her photography, not just the creative fashion shoots. I noticed this the most acutely with the corporate shoot. Both women she photographed didnâ€™t ordinarily wear makeup, so it was fun for them to have my mom do their faces. Then through conversation they became more comfortable around my mom and the camera they gave her real expressions which looked great in the photos. So instead of dreading looking at themselves in the pictures they were excited that they looked good.

[ngg_images source=”galleries” container_ids=”20″ exclusions=”914,915,916,917,918,919,920,921″ display_type=”photocrati-nextgen_basic_thumbnails” override_thumbnail_settings=”0″ thumbnail_width=”240″ thumbnail_height=”160″ thumbnail_crop=”1″ images_per_page=”20″ number_of_columns=”0″ ajax_pagination=”0″ show_all_in_lightbox=”0″ use_imagebrowser_effect=”0″ show_slideshow_link=”0″ slideshow_link_text=”[Show slideshow]” order_by=”sortorder” order_direction=”ASC” returns=”included” maximum_entity_count=”500″]The newborn shoots require a slightly different atmosphere, for a new mother the concern is less on how she, or the baby look on camera, and more about the babyâ€™s comfort and safety. Being a mother herself it is easy for my mom to show her motherly experience, keeping the mother at ease as she positions the newborn child. No matter who is in front of the camera or who is just on the sidelines watching, my motherâ€™s performance always aims to make people feel their best, because when they feel their best they look their best. For me, my mother has photographed me a million times, so at this point being put in front of the camera can be more tedious at times than fun, but for most people being the subject of a photoshoot isnâ€™t something they are used to and it can be a lot of fun for them. [ngg_images source=”galleries” container_ids=”20″ exclusions=”915,916,917,918,919,920,921,922,923″ display_type=”photocrati-nextgen_basic_thumbnails” override_thumbnail_settings=”0″ thumbnail_width=”240″ thumbnail_height=”160″ thumbnail_crop=”1″ images_per_page=”20″ number_of_columns=”0″ ajax_pagination=”0″ show_all_in_lightbox=”0″ use_imagebrowser_effect=”0″ show_slideshow_link=”0″ slideshow_link_text=”[Show slideshow]” order_by=”sortorder” order_direction=”ASC” returns=”included” maximum_entity_count=”500″]Not everyone gets to be on the cover of a magazine, but it doesnâ€™t mean that everyone canâ€™t experience the process to get the kind of picture you might see on the cover of Vogue. During a fashion photoshoot, there can be fun props used, like a fog machine or flour being thrown. The photoshoot with the flour was fun for everyone involved. Taken at night just in the driveway there was no backdrop necessary, just a area for the actress to stand, some lights, and a few bags of all-purpose flour that you would use to make waffles. My mother would work with the actress to create a pose, tinkering with it to get the best look, and then a couple of friends and I would throw flour on either side of her, and my mom would have to capture the right fraction of a second to get what she was looking for. My mother also tries to have the person she is photographing as involved with the process as she can, which makes it more fun for them. If they have any ideas, she works with them to try and make their dream a reality. The whole process is always a lot of fun. [ngg_images source=”galleries” container_ids=”20″ exclusions=”914,917,920,921,922,923″ display_type=”photocrati-nextgen_basic_thumbnails” override_thumbnail_settings=”0″ thumbnail_width=”240″ thumbnail_height=”160″ thumbnail_crop=”1″ images_per_page=”20″ number_of_columns=”0″ ajax_pagination=”0″ show_all_in_lightbox=”0″ use_imagebrowser_effect=”0″ show_slideshow_link=”0″ slideshow_link_text=”[Show slideshow]” order_by=”sortorder” order_direction=”ASC” returns=”included” maximum_entity_count=”500″]One of the most entertaining part of her performance is when she is taking headshots. Itâ€™s very easy to get dull expressions, fake smiles, or just an overall look of unhappiness when taking a headshot, so itâ€™s my motherâ€™s job to bring some life to their face. She does this by giving them prompts, such as, â€œgive me a look like youâ€™re sneaking up on a water buffalo/Donald Trump/â€¦â€, â€œthis oneâ€™s for the movie posterâ€, â€œlook at me like you have eyes on the back of your headâ€, â€œlook at me like Iâ€™m youâ€™re long lost 4th cousinâ€, â€œgive me a look like Iâ€™m your long lost friend who you are starting to suspect is a pathological liarâ€ and so on. Often the goal of these prompts is not actually to get the look she is verbally asking for, but just to get a reaction, which is often confusion mixed with some laughter, and a real smile which looks great in the picture. Every performance has a story, the story of a photograph isnâ€™t always obvious unless youâ€™re there when itâ€™s being taken.

Every photoshoot has its own unique story, which is part of why the performance of photography is so special. For the actress, it was taking an image that she saw herself in, and transforming her from her everyday self, into that image. This is the story of a lot of those types of shoots, however with each individual subject, time and place, there is a unique story with a unique picture as a result. For the corporate shoot, it was the first time for those people getting their professional headshots done for a company website, the event marked their transition into the adult working world. For the newborn photoshoot, she was capturing what the baby looked like within the first 10 days of being born. Babies grow fast, and they donâ€™t stay that tiny for very long. Capturing that moment captured multiple transitions. The transition of becoming a family, the transition of new life, and capturing that small moment before the baby grows like a weed. Another type of photoshoot that my mother has done is senior portraits, which marks the transition from high school to college. No matter what type of photoshoot is happening, there is a distinct transition from when a person comes in, as their everyday self, focusing on whatever is going on in their life, to the person they are at the end, feeling confident and beautiful in front of a camera.

The title of this essay is a line from a song, we were listening to it in the car one day. My mother said she loved the way the line describes a photograph. I think it captures how much life there is in every photo she takes, even though it is only a static snapshot, there is so much to see in every picture, a story in it and behind it. Every photoshoot is a unique performance that is made both by my mother, and the people being photographed. It is a unique art in that once the performance is over, you are left with a memento of the event, an image that you feel really good about and had a lot of fun creating. While you can never recreate the same performance, itâ€™s exciting that every time you step in front of her camera youâ€™re going to have a new exciting experience and leave with a new, creative, beautiful work of art.